At its Annual General Meeting in Vienna today, the International Swaps and Derivatives Association, Inc. (ISDA) announced the results of its Year-End 2007 Market Survey of privately negotiated derivatives.

"As ISDA’s Year-End 2007 Market Survey highlights, the privately negotiated derivatives business continues to grow. While the amounts at risk are just a fraction of notional amounts, these give us a good sense of market activity," said Robert Pickel, executive director and ceo, ISDA. "Developing tools to manage counterparty credit is an important feature of ISDA’s work. Equally important are our efforts to reinforce the operational infrastructure to enable scalable growth and improve and liquidity for the continued development of these important risk management tools."

The above notional amounts, which total $454.5 trillion across asset classes, are an approximate measure of derivatives activity, and reflect both new transactions and those from previous periods. The amounts, however, are a measure of activity, not a measure of risk. The Bank for International Settlements (BIS) collects both notional amounts and market values in its derivatives statistics and it is possible to use the BIS statistics to determine the amount at risk in the ISDA survey results. 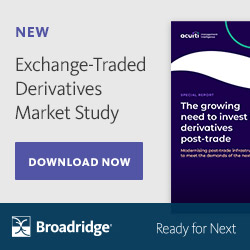